The Montana I Remember 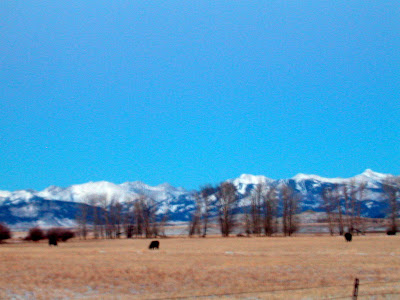 I grew up here. Though by most locals opinion I am not a real Montanan because I don't have generations of Montanans behind me. About 14 miles out of Livingston I grew up on a cattle ranch. I love memories of my childhood. I have always been proud of it. Freedom and spontaneity to me are forever tied to wind and landscape space. It is an open flexible feeling in my chest and a whistle in my ears. Out our front porch we could see the azul and white Crazy Mountains. These are my favorite mountains. The Tetons are beautiful, but not mine. The Three Sisters are just hills and I never did see the top of Mount Robson.

As a child I would stare at the Crazy Mountain Range and image that the Crazy Woman was still living. Crazy Woman Mountain Range I called it in my head. Jeremiah Johnson met the woman right after her family was killed my Native Americans (Indians to use the vernacular of the age). The Native Americans left the woman alone because she was touched in the head and they didn't want to catch her crazy. She has blaze red hair and a wall-eyed look.

The mountain range was a very active place in my imagination. While the Crazy Woman was the headliner, the giants playing 9 pins from Van Winkle were up there too. All myths congregated in that geological beauty. Much like an intersection of Ley Lines or a meeting of American Gods.