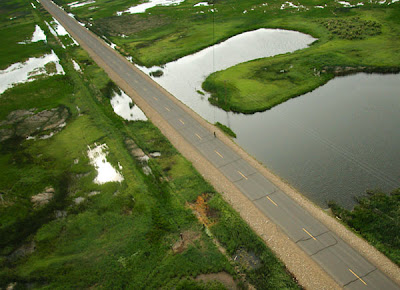 We watched part of Out of Africa this evening. Like a jewel I found one of the thoughts that rattles around in my head from time to time. Robert Redford is describing an African tribe that has no concept of future and if they are incarcerated they die. I would think of this when I was in a bad situtuation and remember I knew that things would be different.


I read Via (the AAA magazine I get for the Northwest) tonight and they wrote of nature sounds. It is amazing how much sound humans and our contraptions make. I remember Mar-Tin and I drove to Plush, Oregon where to Hart Mountain Antelope Reserve is.

After we stopped and picked up some smokes and met a few locals which included a Sam Eliot look alike behind the counter of the Only Grocery Store / Only Bar / Only Restaurant. We drove his little Honda Civic up out of the valley and into the Antelope Reserve and night fell.

We got out of the car and turned off all of our noise makers and listened to the wind. There was no other sound. We made a big point of listening to nothing.

The article in Via "Natural Sound" listed places to escape man made sound and it specifically listed Plush, Oregon.

Of course, it started raining after getting back into the car. Imagine Pouring rain with water on both sides of the car. See above picture. That is the actual road on which we drove.

And lest we forget: Give the right eyes to the desk clerk and you can get whatever size room you need for a good price. In this case, those were eyes of disgust.