I made bread today. I leafed through my Breads book and looked for one that didn't take days to make. I found the Northern Welsh favorite "Bara Brith" or speckled bread. I used to be huge into Ancestry, where my people came from. The more I found out about other parts of the world I got the impression that they didn't care where you think you came from but that you are an American (USA) citizen. So I stopped talking about it. I am 1/2 Welsh and the other half is German and Swedish and Irish and some rumours of Native American. I like the 1/2 Welsh part the best. My Father's Grandfather came over from Wales but they are all dead. So I just know it is Wales. I think I look fairly Welsh, but as I have never been there and "Welsh Women" Google image search doesn't result anything positive I can only assume. Perhaps they describe the common characteristics of Welsh Women at the Welsh National Museum.

As I made the bara brith, I felt that I had made it a thousand times before. I even was going to add ingredients that were not in the recipe like orange marmalade because it felt right. I searched the internet and that is a traditional ingredient. 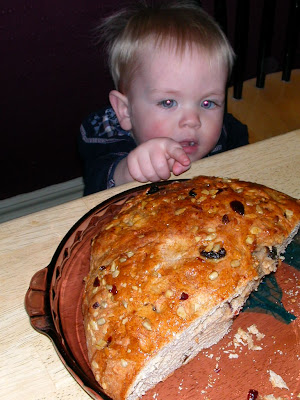 It makes me wonder if these feelings are from a past life or if I have an ancestral memory. I felt so warm and connected with my womanhood. And my little man loved it too! So did my big man and my mama! Slather a little salty butter or add some cheddar and you really have a delicious snack!
My little man said "More" so sweetly of course he could have as much as he wanted. (And with Sunflower seeds, Almonds, Cranberries, Raisins, Honey and mostly Whole Wheat it was good for him too)