So I have never been a fan of St. Patrick's day. It is because celebrating driving the snakes from the Emerald Isles which have been traditionally linked to the native pagan religion didn't seem so cheerful. Since high school I have mostly refused to wear green (except on years when I hanged around with boys that were known pinchers anyway) and stare down the playful. Lately I have mellowed, as I have mellowed in so many other areas, and I wore green and dressed my beloved boy in green as well. The Lamb stew at Nana's was delish. And tonight I had a shot of Hennessey's Irish whiskey. Such a powerful brew that the ice exploded just to touch it. I love Celtic images and history. 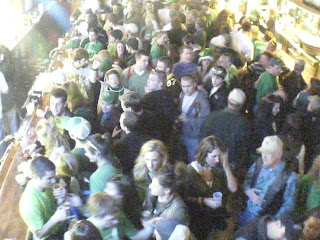 So here is to the Butte Irish Pub Parties for St. Patrick's Day. Here is to 4 hours from now when they are all pissing and puking and walking home. Here's to the crush of beer sweating bodies. And they used to call me strident.