My first movie in months was Hollywoodland. It is a very good film that didn't spoonfeed its audience. Diane Lane and Adrian Brody are amazing in their rolls. Brody plays a conflicted private investigator sucking off the bottom of the detective work barrel. Before he gets the lead of a liftime to the death of George Reeves who's claim to fame was the original "Superman" television series. Reeves' mother wants a second investigation into her son's death as she did not believe he could have commited suicide. Brody has been bonking a co-ed and taking $50 dollars a day to take pictures of a man's wife. The wife goes to work everyday but the man insists that there is more to the story and Brody needs to get off his ass and work for it. Meanwhile we are being introduced to the George Reeves character. It took me halfway through the movie to figure out it was a flashback structed movie! Usually I am brighter than that, so I wonder if the flashback was too smooth? Reeves seems to be the ultimate metrosexual. His one desire is to be a MovieStar.

I am most interested in the conflict within Brody's character. He wants to be a good father, unlike his own, and an outstanding P.I. He is niether in the beginning and we are left to wonder at the end. 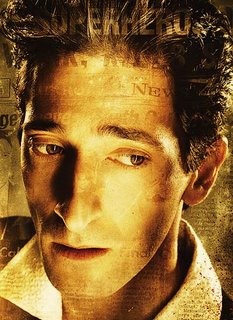 The man that asks him to tail his wife becomes crucial to the apex of the "man versus himself" plot line.

This movie is well written. Upon reflection its style reminds me of "BladeRunner" which I could write on for quite some time.